Did Donald Trump really want to be president?

Since the release of the new book by Michael Wolff “Fire and Fury” there has been a great deal of people questioning: Why did Donald Trump run for office in the first place? There were a number of reasons for this. Regrettably, most of them revolved around mister Trump’s self-interests.

In this article I will try to illustrate the reasons why Trump began his bid for the presidency. Some of these reasons were apparent even going back as far the Republican nomination.

When looking at “why Donald Trump ran for president” it’s important to understand that the biggest source of income the man has is his brand. The Trump name has been put on buildings, clothing, wine and more. The Trump brand, as with any brand, is valued based on its fame and popularity. What Trump undoubtedly hoped was to use the run for the presidency as a way to spread even more name recognition for his brand. If this was the case, he wouldn’t care if he had lost the presidency, since the renown he and his brand would’ve gained from just making the attempt would’ve remained.

Not just that, but Trump was able to benefit financially from his campaign directly. He forced the Trump campaign HQ to set up in one of his own buildings (after vastly increasing the prices). Dinners and events were held in Trump-owned restaurants. The most costly of all of these was that he used his own private aircraft to fly himself and his staff around the country from rally to rally. By doing this Trump was able to funnel vast amounts of campaign money to himself. Setting aside the questions of corruption and conflicts of interest, this means that vast amounts of the money donated to help Trump win the presidency was instead used to enrich himself.

Trump had expressed a desire to run for president for decades. We can only guess why. Maybe he genuinely thought he could do the job better than any other recent president. Perhaps he simply wanted that kind of power. Or he was just curious to see what it would be like.

Regardless of his reasons, Trump had expressed a desire to run for president since the 80’s. Running up to the 2016 presidential election he made it clear he was going to try. A lot of other republican candidates humored him, taking donations from the Trump organization and giving Trump and his efforts coverage and support. However, much to their surprise, Trump used such occasions to establish himself as a real candidate. As there was no one else in the Republican establishment with the same kind of popularity that Trump enjoyed, he ended up winning the nomination. This at last gave Trump the kind of political power he had always appeared to crave. He gained the opportunity to shape the future of the Republican party.

To Trump, running for president was undoubtedly a way to massively boost his ego. Especially when he won the Republican nomination it can be argued Trump was riding high on the adoration of the crowds. 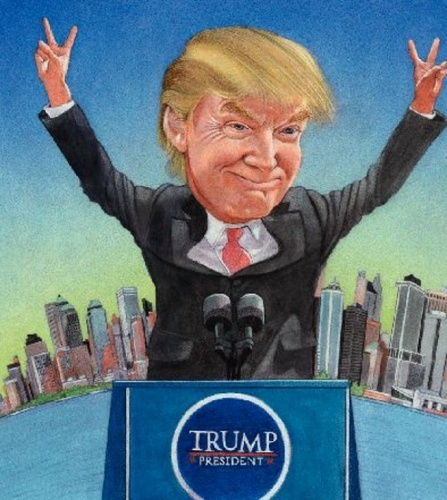 If one needs proof of his rampant egomania, one needs only listen to one of his rallies. If Trump’s rallies had one thing in common, they were always about him. He would be better on foreign policy than other presidents. He’d fix the situation in Iraq in 30 days. He’d bring back jobs and make America great again. Every single speech was to bring other people down and elevate himself in the eyes of his crowd. Whenever he brought up actual policy, he simply said whatever he thought would be most likely to evoke applause. This is why he never mentioned details about how he was going to bring about any of the policies he mentioned. He didn’t care, much like a roman gladiator the only thing that mattered was the adoration of one’s viewers.

Further proof of this can be found after Trump won the presidential election. He continued to attend rally after rally, despite the fact that he should’ve been using this time to fill his cabinet. The job was never what was important to Trump. Stroking his ego was.

The revelations in “Fire and Fury” tell us that Trump acted “horrified” on election night when he realized he had won. Melania was in tears. They knew that their once comfortable lifestyle would be flipped upside down. They’d have to move away from their luxurious living in Trump Tower to the White House. He’d have to relinquish control over his businesses. Plus, they’d be under constant scrutiny from not just the press but also the government.

Trump never ran to become president. He ran to enrich himself, to spread brand-awareness and to stroke his own ego. It’s why he reveled in campaigning but seems at best uninterested and at worst annoyed with the day-to-day work of being president. Because running for president is a popularity contest, but being president is an actual job, and he didn’t sign up to do hard labor.