The Two-Party System: How it destroyed US democracy 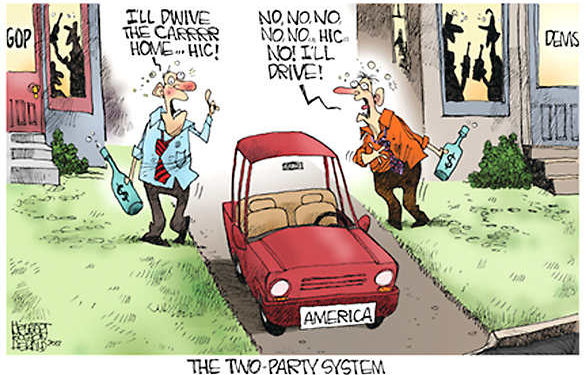 In most democracies around the world, there will be several political parties vying for control at any one time. Here in the Netherlands we currently have thirteen separate parties ruling the country together. An additional eleven parties only hold office at the local level. So why does politics in the United States always boil down to a debate between two parties? Surely a much larger nation would have more parties representing its people? This is directly a result of the two-party system.

In this article I’ll explain how the two-party system came to be, how it continues to be upheld and how damaging it is to democracy as a whole.

The origin of the two-party system in the United States dates all the way back to the era of the Founding Fathers. It began in the 1790’s when the federalist movement clashed with the anti-federalist movement. These two sides clashed until 1816, when they at last reached a consensus. This triggered the “Era of Good Feelings,” a time in American politics when there were no partisan politics. However, they made no legal changes to prevent similar situations from cropping up again.

The cause for the two-party system lies in the first-past-the-post (FPTP) system used by the United States. This system means that when an election begins for an electable office (say for a position on Congress), whoever gets a plurality in the votes wins the seat. The losers of the election get no representation at all.

Though B, C and D form a much larger part of the population than A, A is the only group that gets any representation.

This system eventually collapses politics into a two-party system. This is because it drives away people from voting on small parties, since these lack the plurality to win elections. This drives smaller parties to form much larger coalitions, eventually dividing the nation along a political lines. It’s why in the United States being a member of the Democratic party is considered synonymous with being pro-choice, while the Republican Party is considered pro-life.

While the Founding Fathers never intended for the United States to become ruled by a two-party system, that still became the end result.

Why hasn’t it been fixed yet?

Voters in the United States should be outraged at their lack of choice every election. In fact, polling states that they at least disapprove of their representatives. About two years ago 86% of American showed to disapprove of their representatives in Congress. In any other nation the party in power would be panicking to see those numbers. After all, their people would undoubtedly vote them out of office during the next election. So, why has that not happened yet?

The first reason is a sheer lack of choice in politics. You might not want to vote for your Democratic representative, but he’s the only pro-choice candidate in your district. Alternatively, you might have the same problem with your Republican representative, but he’s also the only candidate that swore not to touch your second amendment rights. Your choices boil down to a bad choice and a worse choice, which feels like you have a choice even if it’s no choice at all.

The second reason lies at the core of the FPTP system. The only parties that ever get elected are the two biggest parties. They are the ones in power. Not only did that system bring them into power, it also helps them maintain their power. As long as the two-party system exists, neither party ever has to worry about being voted out of office. They can just point at their opposition and say “Would you rather have them in power?” effectively silencing the debate. Effectively, the people in power have no reason to change the system. Doing so might cost them their jobs, after all.

Perhaps in contrast to the wishes of the people, the United States government has actually passed laws that made it harder for third parties to emerge. For instance, the law states that each state can determine for itself what the requirements are for a third party candidate to get on their ballet. This means that a prospective presidential candidate would have to pay their way to meet the different requirements in each of the 50 states. On top of that, they would have to gather tens of thousands of signatures to legitimize themselves.

The consequences also extend to other issues. The two parties oppose each other fiercely when it comes to a myriad of issues. These include gay marriage, abortion, foreign policy, taxes and much more. This means that voters are typically forced to pick what issues matter the most to them and vote along with the party that aligns with those issues the best, even if they disagree with that party on other issues. 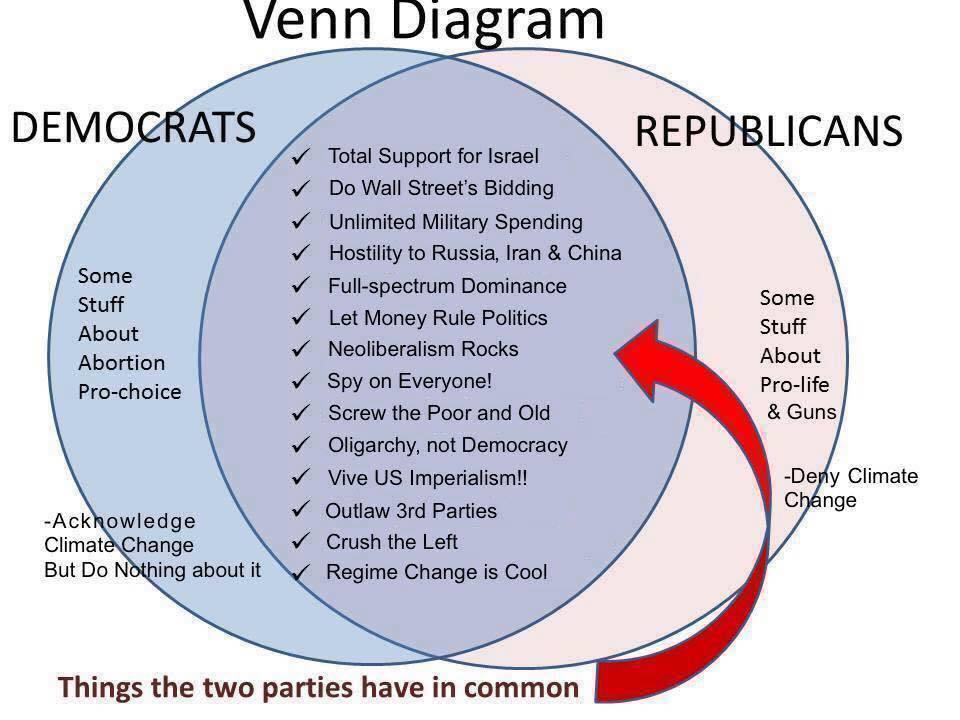 Most of the policies they agree on mainly benefit the rich that donate to both sides.

It has also resulted in the corruption of the political system. The Republicans were the first party that allowed for donations by large corporations and wealthy millionaires to help fund their campaigns. However, the Democrats also opened up to these kind of political donations in the 70’s. This may have seen counter-intuitive, since it opened them up to criticism of corruption. However, the Democratic Party could always just point at the Republican Party and tell their voters “Would you rather have them in power?” to avoid criticism. Since the country is ruled by a two-party system, it doesn’t matter that both parties are corrupt. After all, voters don’t have a choice.

The two-party system has thoroughly corrupted American democracy. In fact, if it had not been for the two-party system, it’s unlikely the last presidential election would’ve featured such unpopular candidates. The nation as a whole would undoubtedly be substantially less divided if it wasn’t for this. However, the people with the power to make the changes needed are the ones most unwilling to do so.

Right now, all American voters can do is to try and vote for third-party candidates and hope for the best. Many of the issues plaguing the nation today are unlikely to be solved under the two-party system.